All sales figures in the below ramble are sourced from www.buzzjack.com. 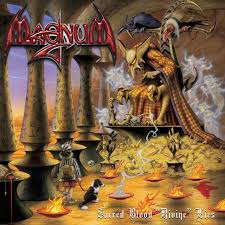 Yesterday saw the official release of Magnum’s umpteenth album Sacred Blood, “Divine” Lies. As it’s mysteriously absent from Amazon’s Auto-rip service, and the physical CD has yet to deign to pop through the door I’m left not to wonder how great it will be (that’s a given, it will be amazing – certainly all the reviews point to this, as if there was any doubt), but…where will it end up in the charts? Their last effort, 2014’s superb Escape From the Shadow Garden, entered at #38, seeing them back in the UK top 40 for the first time since 1992’s Sleepwalking reached #27, and continued their well-deserved upward trajectory of recent years.  Indeed, in an era of declining album sales Magnum are bucking the trend. Looking at their efforts so far this decade, 2011’s The Visitation reached #55, with the following years On the 13th Day bettering it by a margin and reaching #43. The interesting bit to me is that 12-spot jump was based on only 25 extra first week sales (3098 vs 3073), while Shadow Garden’s extra 5-spot climb required a much larger increase – 3683 sales, to be precise. So while that top 40 placement was cause for celebration, subsequent weeks have suggested they were a little unlucky not to do even better, a fact which has had me confidently predicting a top 30 entry for the new album. Then I saw this week’s charts sales figures…

Goodness, what a slow week. Buzzjack doesn’t provide the individual sales figures for all albums, but in at #25 is Australian band Wolfmother’s 4th album Victorious with sales of…3089 – yep, a full 30 places higher than The Visitation managed 5 years ago with almost identical sales. On that basis, top 30 seems assured…but let’s go crazy and ask…how about top 20? I wouldn’t have previously thought that a possibility, but this week Sia only needed to shift 4139 copies (of her previous album, not her latest effort that’s residing in the top 10) to sit at #19 and that is not an impossible target for Magnum to reach, especially when you consider that Shadow Garden almost managed a second week in the top 100, with second week sales of 943 consigning it to #105 (a fact I only discovered last night - I’d always assumed the second week drop-off would be far more pronounced).

Now, I have to stress again that this week is unusually slow – last week Taylor Swift was at #20 with sales of around 5100, while a few weeks earlier Steven Wilson’s 4 ½ made #21 with over 6000 sales – though he did have to contend with the major revival in the Bowie back-catalogue spurred by his shock passing – so it really will need to be a ‘perfect storm’ scenario comprised of a further week of slow sales, no further sudden deaths of rock icons, and mothers across the land waking up next Sunday to receive copies of current top 5-perennials Adele, Coldplay or the Best of Bowie, alongside their flowers and chocolates.

A common view I see expressed these days is that the charts don’t matter anymore, but as long as there is a chart anyone will want to be as high up it as possible (if there’s a chart you might as well be at the top of it, as Noel Gallagher said), and a good chart position can be the difference between a promoter booking extra dates on a tour (bread and butter to a touring band of Magnum’s vintage) so I’d say, yes, it does matter – and that’s where the fans come in. Obviously 95% of the dedicated fanbase will have pre-ordered anyway, but assuming you’ve done so…were you planning to buy in multiple formats? If so, don’t wait to add that vinyl edition to your collection, buy it this week alongside your special edition CD/DVD package. Similarly, what do you mean you’ve bought a copy for yourself, but not a spare for a friend or close family member (the ideal – if alternative -  gift for Mother’s day? Erm, yeah, go on then!) who may have been missing out all these years? Literally every sale achieved this week counts.

With a bit of effort, and a lot of luck maybe, just maybe, we could help see Magnum land only their 4th top 20 album. Got to admit that would be nice, wouldn’t it?
Posted by Radiat10n at 09:37 No comments: Links to this post