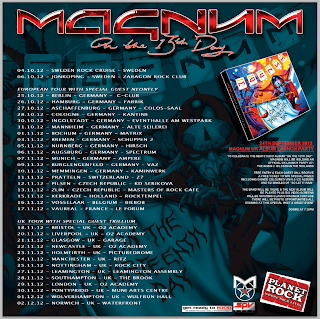 I’ve said it before, and no doubt I’ll say it again, but it really is an amazing time to be a Magnum fan. In a period of just under two years (the time that Jet Records used to keep their albums sitting on the shelf before release!) we’ve had two brilliant full studio albums (last year’s The Visitation and the brand new On the 13th Day, for those who haven’t been paying attention) plus the Evolution best-of, not to mention the treats on 13th Day’s bonus disc...and, of course, plenty of touring.

On that front, it had been close to a full year since I last saw them live (in Carlisle, which you can read about HERE) and the thought of seeing them only once this year didn’t sit well with me, hence I made the trek over to Bristol last weekend for the first night of the UK leg of the 13th Day tour.

This made it the fourth different city in which I’ve seen them now, but it doesn’t matter where you go, a crowd at a Magnum gig is guaranteed to be special and the locals certainly didn’t disappoint. Despite, as frontman Bob Catley put it, ‘a bit of competition up the road’ (i.e. Motorhead playing at Colston Hall), the Assembly was packed with fans who’d all brought their best singing voices with them. For a band that never quite made it to the really big time they’ve maintained an impressive niche in the market over the years and the loyalty and devotion of the fans is something to behold. Some veteran bands struggle to muster more than polite applause for new material, but Magnum fans treat new songs like old favourites – and old favourites with something approaching religious fervour! The energy that flows from and to the stage is difficult to convey in mere words (so you’ll just have to find out for yourself some time, ‘cause I can’t be arsed trying, okay?)


We’d been promised a bit of a shake-up of the set list, and the resulting set really only had two flaws. One: there weren’t enough old songs, and two: there weren’t enough new songs (admittedly these flaws could quite easily be distilled into one). But that’s the price you pay for being smack-bang in the middle of a second golden age that’s continually throwing up new songs every bit as classic as those they built their reputation on in the first place and there’s only room for so many songs in a night. As there’s (thankfully) no sign of them slowing down, this is only going to be exacerbated by each new album release. But there are certainly worse problems for a band to have. The only real solution is to introduce three hour setlists...

In terms of what was played they got it about as right as it’s possible to get, playing four of the best from the new album (All the Dreamers, Blood Red Laughter, Dance of the Black Tattoo and See How They Fall) one song each from the previous four albums and a nice mix of the older material.  Les Mort Dansant and When We Were Younger are my favourite songs from the pre-split and post-reformation eras, respectively, and both survived the setlist shake-up, as did perennial favourites How Far Jerusalem, Vigilante and the obligatory Kingdom of Madness. But we were also treated to eight songs I’d never witnessed live before – the four new ones (obviously!) plus long-rested oldies The Spirit, Rockin’ Chair and Days of No Trust (the latter two providing a suitably ecstatic end to the evening during the encores). But the biggest surprise of the night – for me at least – was The Flood, another personal favourite, and one I never thought I’d ever see live. That they played this and Les Mort Dansant back to back suggests they were trying to pummel my emotions the way Marillion do – if this was their intention they certainly succeeded!  Personally I’d have probably rested Brand New Morning in favour of another 13th Day track or two, but this is a minor quibble. I had assiduously avoided spoilers (if you’ve been trying to do the same you should probably have stopped reading a little while ago...whoops) for maximum enjoyment – and when I see them again in London on Thursday I’ll know exactly what’s coming, which will be just as enjoyable in its own way.

I’ve never been disappointed in the past, but I think this was the very best I’ve seen them to date. Bob had seemingly been reigning in his tendencies to evoke greater emotion in the songs through the art of semaphore last year, but he was at his full-on arm-waving best and sounding as fantastic as ever (although he does seem to have shrunk – again! – in the past 12 months or so...). Equally the rest of the band seemed to have found an extra burst of energy, from the baby of the band (bassist Al Barrow) bouncing around like a kid in a sweet shop, to the Thundering (oh dear) dynamics of Harry James on drums. Tony Clarkin – the genius guitarist/songwriter without whom Magnum could not exist – also appears to be enjoying himself on stage now more than ever, as does keyboardist Mark StanWAYYYYYYYYY (well, that’s how Bob pronounces it!).

As for the competition down the road – well, with both camps emerging together around 11pm the Motorhead fans looked like they’d had a decent night, but I can say with a fair amount of certainty that we Magnum fans got the better deal. A bloke I met afterwards in Bristol’s finest (ahem) late-night pizzeria summed things up for me by gazing longingly at my programme* and admitting he’d gone to the wrong gig.  I take this as definitive proof that if you have a chance to see Magnum live and you don’t take it you will regret it, so let this be a warning to you!. (10/10) 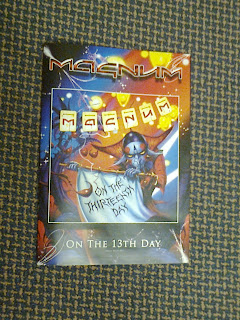 *Programmes are not usually something I go for, but it is very nice indeed, even if it is missing most of the paragraph about Chase the Dragon!
Posted by Radiat10n at 08:34 No comments: